We ventured out for something other than beignets today and ended up at the Ruby Slipper Cafe in Mid City. Rated one of the best of New Orleans in Gambit, we really enjoyed our visit. 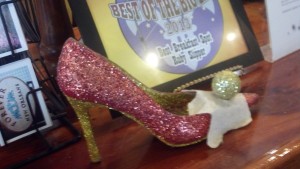 They have quite a wonderful selection of breakfast items (which they serve all day), including the typical southern breakfast of grits, bacon, eggs and biscuit that was as far as my Dad was willing to explore.

Mom went for one of their breakfast specials – Eggs Tinga with black beans, chicken, tortilla strips and chipolte sauce with two eggs on top. All the flavors combined marvelously to perk up the taste buds and welcome the new day.

I had their Eggs Blackstone – two poached eggs over bacon, a roasted tomato slice and a huge buttermilk biscuit and topped with hollandaise sauce. Perfectly cooked eggs and the runny yolk mixed with all the other ingredients to make every bite delicious. Oh, and the homestyle potatoes were terrific, too.

Service was fast and friendly with coffee topped up quickly. Parking is a little tight and, like many other breakfast places they don’t take reservations but they turn the tables fast, so the wait isn’t too terribly bad.

For my birthday dinner, my parents took me out to dinner to Emeril’s Delmonicos. Located on St. Charles Avenue, it was acquired by Emeril Lagasse and completely renovated.

We started with the Boudin Balls – the twist was the jalepeno and cream cheese stuffing in these which gave them heat. Very nice flavor and just whet our appetites.

Dad had to have some greens, so he ordered the Strawberry Spinach salad. The balsamic reduction dressing was a little overpowering but the salad was pretty tasty with the fresh strawberries, pecans and baby spinach.

Below is a picture of my steak. I ordered the 20 ounce dry aged, bone in rib-eye and I ate every bite. It was almost a religous experience with the perfectly cooked meat. They brought sauces to the table but the meat needed no help getting into my belly!

We finished the meal with a blackberry cobbler. Tart berries melded perfectly with the creole cream cheese ice cream. A lovely palate cleanser after a fine meal.

The service was excellent – we had a main waiter plus several others to make sure our water never went an inch below the lip and kept our wine glasses full. They were all friendly and knew the menu inside and out and were quite happy to answer all our questions. All the plates were delivered to the table at once and we didn’t feel rushed by them taking away any until the last diner finished their last bite.

It is a pricey place to have a meal but for those special occassions, this is a wonderful place to enjoy a bit of grand, old New Orleans dining with a modern flair.

My dad is a big Crabby Jacks fan so we always stop by there when they’re in town. I also go fairly regularly as they have excellent po-boys.

This last trip had us trying the BBQ brisket po-boy. Sweetish sauce and piled high with meat, it is definitely the sort of sandwich one eats when one doesn’t have to work in the afternoon and can just enjoy the meat coma. 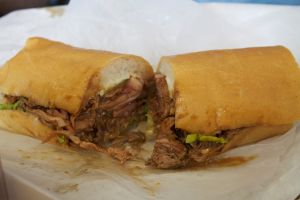 It is usually packed at lunch and you might have to share a table but that is just in keeping with all the Dr. Bob “Be Nice or Leave” artwork on the walls. I highly recommend them for po-boys.

My girlfriend made me breakfast the other day and it was so good, I have to post about it. We had toasted coconut waffles and the addition of coconut adds a delicious sweetness to the buttermilk batter. We also tossed in some chopped pecans because you can’t go wrong putting pecans in waffles!

There is good barbecue and then there is great barbecue. Leatha’s Bar-B-Que Inn, on Highway 98 west of Hattiesburg, is one of the great ones. If you want to read a little more about the inspiring woman who opened and ran the joint, follow this link to Robert St. John’s write up on Leatha Jackson after her death in September. 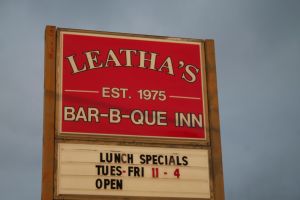 Each meal came with two sides and they weren’t anything to particularly write a blog about They mainly served to fill belly space that would have been better filled with meat. In fact, the ‘special’ slaw was way too sweet for me — it tasted like they had added sugar to it. On the other hand, the potato salad was good with the pimentos in it.

It is the meat that had the angels singing. The half slab of pork ribs was fall off the bone tender and their sauce was sweet and tasty. I ordered the half and half and with my slab I got an order of pulled pork. It was nice and flavorful and we were each able to make a sandwich on the rolls they brought. The fried potatoes had a nice crunch but not much for taste.

Michelle ordered the half chicken and it was juicy and tender. It didn’t have that much flavor once you ate past the sauced skin but, they brought a cup of extra sauce, so we were able to keep it flavored all the way to the bone. The baked beans were just okay. 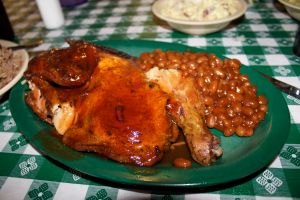 When we finished there wasn’t much left of the pork but the bones.

One of the things I like was that instead of napkins, they gave out white wash cloths – they were able to absorb a lot (not that we also weren’t licking our fingers, too). Service was fine after the woman at the register stepped up to bus the table but I attribute that to them being as busy as they were – it was early on a Friday night and the place was pretty packed.

I think this is definitely a place to be put on my return trip places, although next time I may just order the whole slab and nothing else.

I was in Hattiesburg for lunch today and went to a gem of a Thai restaurant. Jutama’s Restaurant has a very friendly staff and offered a pretty deep menu of curries, noodles and specialties of Thai cuisine.

I judge a lot of Thai restaurants by their Tom Kai Gai. Combining coconut milk and lemon grass, ginger, lime, mushrooms and chicken into a taste of heaven is an art that Jutama’s has in abundance. I slurped up every bite and it certainly tasted like more.

However, we had both ordered entrees, so no more soup for me! For the main dishes, I went with the chicken in peanut sauce and the sauce was a little thin but nicely flavored.

I was so impressed with the carrot art that I took a separate picture of it:

Michelle ordered the Drunken Noodles. She requested they serve them at 4.5 (on a 5 point heat scale), so it was a little hot for me. Not to mention, she ordered it with tofu. Not bad flavors once your sinuses cleared from the spice.

We ended the meal with mango, sticky rice and coconut cream sauce. It was another piece of art for both the eyes and the palate. 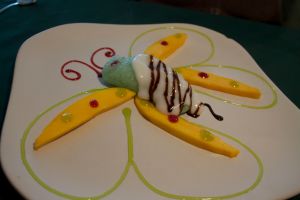 If you’re ever in Hattiesburg, I would most sincerely recommend this restaurant. Authentic Thai is hard to find in the deep South but having such great tastes plus such great service makes Hattiesburgians very lucky indeed.

I’m up visiting in the Hattiesburg area of Mississippi and was glad I was near Collins, Mississippi for dinner. In a converted Sonic drive thru is the Deli Diner.  It is rated as one of the best diners by Mississippi Magazine and I can sure taste why!

The menu is eclectic with lots of panni sandwiches and wraps, a wide selection of burgers and even an interesting selection of salads. The bread is all made in house and is definitely worth choosing when given the option.

We started with their cheese steak nachos – creamy queso with piles of shredded beef. It definitely tasted like more but then our main course arrived, so we just enjoyed the memory.

I went for a chicken artichoke pesto panni on rosemary bread and it was wonderful – great flavor on the chicken and a taste sensation with the cheese and bread and pesto sauce and artichoke hearts. Michelle had the Crunchy Asian salad with a huge quantity of chicken, cashews and the crunch from chow mein noodles. It was good enough for me to break my long standing habit of avoiding salads.

We ended the meal with an excellent brownie – moist, chocolately and delicious plus a drizzle of caramel sauce on top. Yum!

The staff is friendly and personable and was quick to clear the table and then leave us to talking. We stayed almost thirty minutes after close catching up and were never bothered about clearing out for them to go home. In fact, they even joined us for a bit!

Thanks to Michelle for the lovely brownie picture!