Michelle has a freezer full of sweet corn that was put in there fresh out of the field. We cut the kernels off a number of the ears and got to work in the kitchen.

We started with making the base for sweet corn ice cream so it could sit in the refrigerator overnight and get good and cold before putting it in the ice cream maker. We also made corn fritters to go with our pulled pork sandwiches.

Remove the kernels off the corn and place in a saucepan with the milk, heavy cream, 1/2 cup of the sugar and place over moderate heat, stirring until it comes to a boil. Turn off the heat and allow the ingredients to steep for one hour, covered.

Remove about one cup of corn but don’t throw it out. Puree the mixture in the pot with a blender before returning to the pot. Bring this to a simmer. Meanwhile, whisk the egg yolks with the remaining 1/4 cup sugar. When the liquid comes to a boil whisk in about half of it to the yolks and stir rapidly to temper the eggs. Return to the pot and cook over low heat until the mixture covers the back of a spoon. Add the vanilla. Return the reserved corn to the ice cream base and pour into a container. Let it cool overnight in the refrigerator. Freeze according to the manufacturers directions of your ice cream maker. 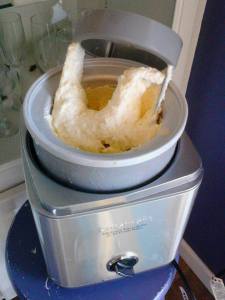 This recipe is slightly modified from the one Chef John Folse did on his show a few years ago. I believe his had both jalapeños and cayenne pepper in them.

Using a sharp knife, cut the kernels from two ears of corn. Transfer kernels to a small bowl. Grate kernels from remaining ears of corn on a grater into the same bowl. Using the back of a knife, scrape any pulp and corn milk from cobs into the bowl. Stir in cornmeal, egg, flour, cream, onion and salt, mixing well. In a large, heavy-bottomed skillet, heat oil over medium-high heat until shimmering. Drop spoonfuls of batter into hot oil. Fry until golden brown before flipping over to cook the other side. Using a slotted spoon, transfer fritters to a plate lined with paper towels. If necessary, add more oil to skillet and heat until shimmering then fry remaining batter. Serve fritters immediately.

This site uses Akismet to reduce spam. Learn how your comment data is processed.