After a sunrise walk along the beach in Gulf Shores, Alabama from rain into sunshine and back into rain, we decided to go to a nearby restaurant. Bill’s By the Beach was our choice, mainly because it opened at 7am but also because it had a lovely view of the just traversed beach.

We started with drinks. I had a Bloody Mary which came with a huge stalk of celery, a green bean, olives and a lime wedge. They rimmed the glass with cayenne and something else (maybe paprika) so I drank from the straw but it was a nice pick me up to begin the meal. 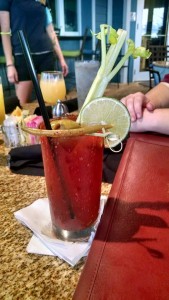 My sister, Kathy, had the Florentine Benedict – spinach, beefsteak tomato, poached egg, english muffin. Her egg was just slightly over done (not very runny) but the Hollandaise sauce was very good. 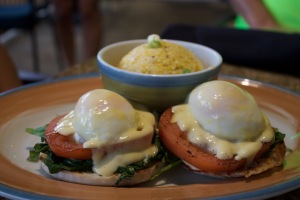 Her husband, Wayne, had the Hash on the Beach – sausage, onion and a sunny side egg over a huge bowl of their breakfast potato.

Michelle had the traditional Eggs Benedict. It was her first time having the dish and she did enjoy it. The cheese grits were a bit thick but had a good flavor. 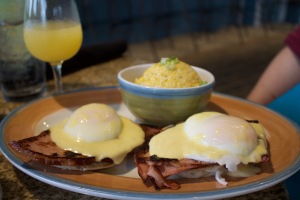 I went for the chicken and waffles. I was a little disappointed in the waffles (they were pretty tasteless) but the chicken tenders were fine. 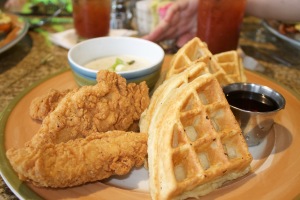 The prices are typical of a beachfront restaurant but the server was friendly and kept us plied with drinks, so we were happy to pay (and leave a generous tip) by the end.

This site uses Akismet to reduce spam. Learn how your comment data is processed.